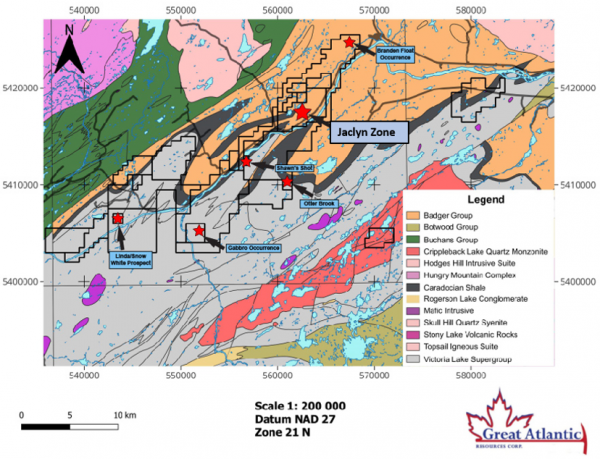 Seventeen drill holes are planned during 2022 at the Jaclyn Main Zone (JMZ) for a total meterage of approximately 4700 meters. The objective of this drilling is to expand the JMZ’s inferred resources by means of definition drilling along structurally important zones to the east and west of the JMZ. The intersection of multiple structural features determined using a combination of information garnered from recent drill intersections, historic airborne geophysics (magnetics and electromagnetics), historic drilling intersections, as well as historic structural geology indicate that these are prime drilling targets. Based upon these factors, the Company’s technical team is confident that the planned drilling will expand the JMZ and increase the inferred gold resources. Following completion of the 2022 drilling program Great Atlantic plans to generate an updated NI 43-101 technical report and resource estimate. The Company reported a National Instrument 43-101 compliant inferred resource estimate during late 2018 for the Jaclyn Main Zone of 357,500 tonnes at 10.4 g/t gold (119,900 ounces of gold – uncapped).

The Company plans to drill a minimum of four holes in the areas around the western extension of the JMZ where favourable structural trends strongly suggest a westward continuity of this system of gold veins. In addition, a minimum of eight drill holes are planned to assess the continuity of the JMZ gold-bearing veins to the east and down dip. The number of drill holes within these targets will be expanded if the results warrant it.

A northeast striking structural zone was delineated using aeromagnetic data that connects with the JMZ suggesting the potential to host sub-parallel quartz veins. Great Atlantic plans to test this  high priority target  with five drill holes, and if gold mineralization is intersected, further drilling will be warranted. 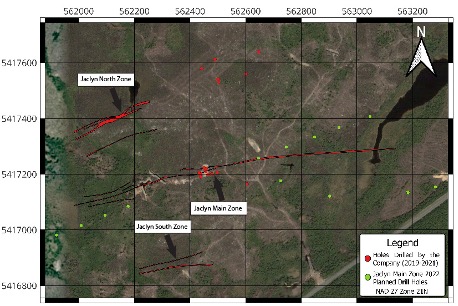 A secondary objective of the 2022 drilling program is to determine if any of the adjacent gold-bearing vein systems in the area surrounding the Jaclyn North Zone (JNZ) can yield results significant enough to warrant more extensive drilling programs in the future. Drilling within the JNZ or any adjacent zones where gold has been identified will be conducted only following a very low frequency electromagnetic (VLF-EM) and magnetics ground geophysical survey, the reasoning being to ensure the highest probability of success for drilling in these areas. Three drill holes completed by the Company during 2020 in this area intersected gold bearing quartz veins approximately 260 meters east of the previously known extent of the Jaclyn North Zone (based on historic drilling). Gold assays are still pending for drill core samples from three holes completed during 2021 in this area. Samples collected during 2017 and 2020 in this same area from multiple gold-bearing quartz boulders yielded high grade gold values including samples returning 157, 162, 208, and 332 g/t gold (please see previous news releases in the Company’s website). These samples are located within a 300-meter long zone of gold-bearing quartz vein boulders.

Great Atlantic currently has a drilling permit for 33 holes at the JMZ and JNZ which expires on August 16th, 2022. The 33 holes covered under this permit include 15 holes within the JMZ and 18 holes within the JNZ Zone. The Company is currently drafting a supplementary diamond drilling permit application for the 2022 exploration program for planned holes not covered under the existing permit.

During the last quarter of 2018, Great Atlantic released a National Instruments 43-101 (NI 43-101) Technical Report with a summary of the exploration undertaken by the Company coupled with a mineral resource estimate of the JMZ (refer to Company’s News Release of December 6th, 2018; and Sedar-filed National Instrument 43-101 Technical Report on the Golden Promise Property, Central Newfoundland (revised), dated December 4, 2018 by Mr. Greg Z. Mosher, M.Sc. App., P.Geo., and Mr. Larry Pilgrim, B.Sc., P.Geo.). The following is an excerpt from that report stating  the reported inferred mineral resource estimate for the JMZ. 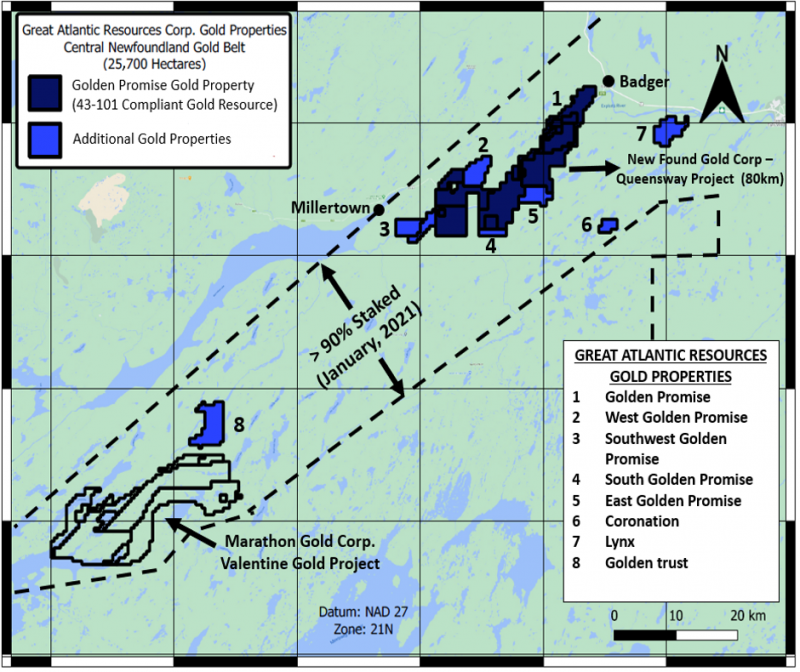 David Martin, P.Geo. (New Brunswick and Newfoundland and Labrador), a Qualified Person as defined by NI 43-101 and VP Exploration for Great Atlantic, is responsible for the technical information contained in this news release. 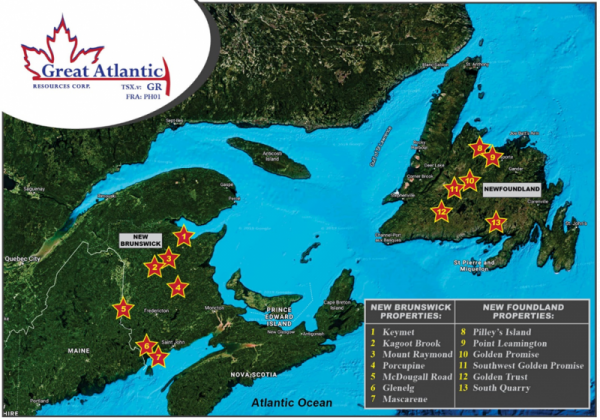