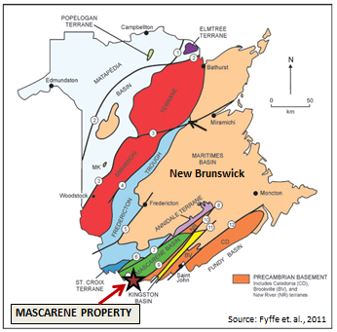 VANCOUVER, British Columbia – February 13, 2018 – GREAT ATLANTIC RESOURCES CORP. (TSXV.GR) (the “Company” or “Great Atlantic”) is pleased to announce it has acquired the Mascarene Cobalt-Copper-Nickel-Gold Property in southwest New Brunswick through an option agreement with two private New Brunswick companies. Great Atlantic can acquire 100-per-cent interest in the property by means of cash payments. Historic rock rubble samples from historic workings include reported values of up to 17.5% Cu, 0.52% Co, 0.38% Ni and 21.8 g/t Au. Great Atlantic has also expanded the property through claim staking. The property covers an area of approximately 2,080 hectares.

The Mascarene Property is reported to contain multiple copper +/- nickel, cobalt, gold occurrences with historic pits / shafts dating back to the 1800s (N.B. Dept. of Energy and Resource Development Assessment Reports and Mineral Occurrence Database files). Sulfide bearing veins are reported at some of these sites.  Mafic intrusive (gabbro) is reported at some sites. Magnetic geophysics anomalies occur within the property, some over 5km long. Great Atlantic is targeting these anomalies as potential sources of mafic intrusive hosted copper-cobalt-nickel mineralization. Readers are warned that historic data referred to in this News Release have not been verified by a qualified person due to winter conditions at the time of the property acquisition. Great Atlantic has not conducted any sampling on the property.

The Mascarene Property is located approximately 6km southwest of the town of Saint George. Access is excellent with paved provincial roads transecting or in close proximity to the property.

The optionor will retain a 2.0-per-cent new smelter return royalty which Great Atlantic may buy down one-half (50 per cent) of the NSR royalty by paying $500,000 per ½ percent, leaving the optionor with a 1.0-per-cent NSR royalty.

David Martin, P.Geo., a Qualified Persons as defined by NI 43-101, is responsible for the technical information contained in this News Release. Mr. Martin is the VP Exploration for Great Atlantic Resources Corp.