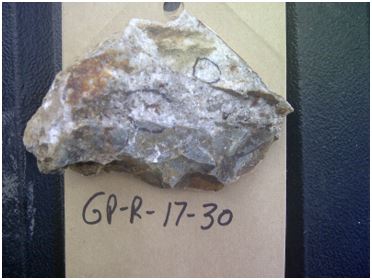 VANCOUVER, British Columbia – June 4, 2018 – GREAT ATLANTIC RESOURCES CORP. (TSXV.GR) (the “Company” or “Great Atlantic”) is pleased to announce it has commenced the 2018 exploration program, beginning at its Golden Promise Gold Property, located in central Newfoundland. The Company is also planning exploration during 2018 at other properties, including its South Quarry Tungsten and Pilley’s Island Precious – Base Metal Properties in Newfoundland and its Keymet Precious – Base Metal and Mascarence Cobalt – Copper – Nickel – Gold Properties in New Brunswick. The Company has commenced a program of prospecting and rock – soil geochemical sampling at the Golden Promise Gold Property targeting multiple areas. Gold- bearing quartz veins are reported in multiple areas of the Property, including at least 4 gold- bearing quartz vein systems reported in one zone referred to as the Jaclyn Zone.  The Company is currently exploring select areas for additional gold- bearing quartz veins. These include areas of gold- bearing float identified by the Company in 2017, soil geochemical anomalies identified by the Company in 2017, and favourable areas based on reported bedrock geology and reported historical airborne geophysical data. Quartz float samples collected by the Company during 2017 in one target area (referred to as the Branden Zone) in the northern region of the Property returned 57.2 and 200 grams / tonne (g/t) gold (News Release of August 28, 2017). The Company is exploring the southern region of the Property including areas peripheral to the Shawn’s Shot quartz vein. A 0.32 meter long chip sample collected across the vein by the Company in 2017 returned 48.2 g/t gold (news Release of August 28, 2017). The Golden Promise Property is located southwest of the town of Badger and approximately 55 kilometres northeast of the Valentine Lake Property of Marathon Gold Corp. Mr Christopher R Anderson  ” Always be positive, strive for solutions, and never give up ”