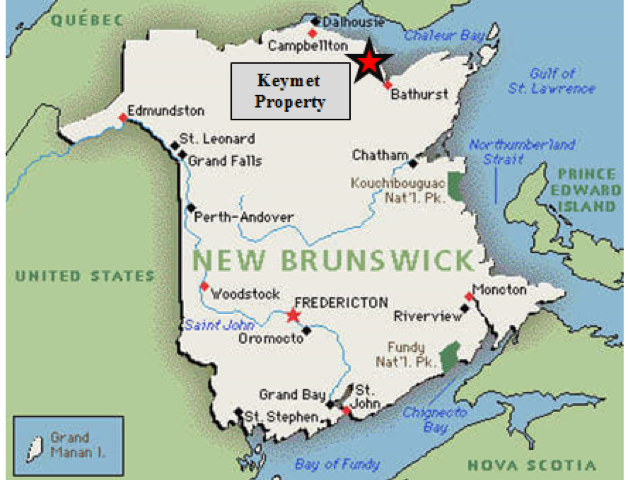 VANCOUVER, British Columbia – March 20, 2018 – GREAT ATLANTIC RESOURCES CORP. (TSXV.GR) (the “Company” or “Great Atlantic”) is pleased to announce it has made the final option payment for its Keymet Precious – Base Metal Property, located near Bathurst, northeast New Brunswick. The property is reported to host numerous base metal – precious metal bearing veins including the historic Keymet Mine. The Company recently intersected mineralized veins northwest of the historic Keymet Mine including an intersection of 18.80% Zn, 3.55% Cu, 1.16 % Pb and 576 grams / tonne (g/t) Ag over 1.27 meters core length in a newly discovered vein and 3.54% Zn, 0.92% Cu and 115 g/t Ag over 12.05 meter core length plus 0.64 g/t Au over 19.96 meter core length in a newly discovered gold bearing zone (News Releases of December 20, 2017 and March 2, 2018). The Keymet Property is approximately 4 km north of the historic Nigadoo River Mine of which copper, lead, zinc and silver production from polymetallic veins occurred during the 1960s – 1970s. The Company’s focus since acquiring the Keymet Property has been the northwest region of the property. At least seven vein occurrences with lead, zinc and +/- copper, silver and gold are reported in this region of the property in addition to the polymetallic veins reported at the historic Keymet Mine (source: New Brunswick Dept. of Energy and Resource Development Mineral Occurrence Database). The Keymet Mine operated during the mid-1950s, producing copper, lead, zinc and silver.  Production at this mine was terminated due to a fire at the site. Diamond drilling to date by the Company has been shallow with all but one hole less than 100 meter vertical depth and one hole to approximately 170 meter vertical depth. Planned 2018 diamond drilling will test both the Elmtree 12 vein system and newly discovered vein in Ky-17-8 along strike and at depth. -Drilling is also planned to test the continuation of the newly discovered gold zone intersected in hole Ky-17-6.

Arsenopyrite bearing metasediment boulder samples collected by Company prospectors in 2011 approximately 1.5 km northwest of the historic Keymet Mine were reported to return up to 51 g/t Au (News Release of March 2, 2012). A Qualified Person has not verified this sample data. This is the general area of the Elmtree 12 vein occurrence.

The historic Nigadoo River Mine is located approximately 4 km south of the Keymet Property. Polymetallic massive sulfide veins were mined at the Nigadoo River Mine during the 1960s and 1970s with copper, lead, zinc and silver being produced. The N.B Dept. of Energy and Resource Development Mineral Occurrence Database reports shaft depth and production totals at this historic mine. Production during 1967 – 1971 is reported as 1.126 million tonnes at 2.2% Pb, 2.1% Zn, 0.24% Cu and 92.57 g/t Ag. Production during 1973 – 1977 (after a 2 year closure) is reported to be 0.733 million tonnes (only partial metal grades reported). The shaft is reported to at least 470 meter depth.

Readers are warned that mineralization at the Elmtree gold deposits and historic Nigadoo Brook Mine is not necessarily indicative of mineralization on the Keymet Property.

Access to the Keymet Property is excellent with paved roads transecting the property, including a provincial highway. The property covers an area of approximately 3,400 hectares. On Behalf of the board of directors
“Christopher R Anderson”

Great Atlantic Resources Closes Second Tranche of Financing for a Total To-date of $1,436,500