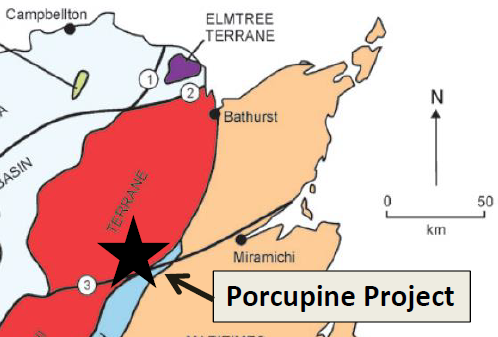 VANCOUVER, British Columbia – October 25, 2016 – GREAT ATLANTIC RESOURCES CORP. (TSXV.GR) (the “Company” or “Great Atlantic”) is pleased to announce it has confirmed a new zone of lead and tungsten soil geochemical anomalies at its Porcupine Precious – Base Metal and Rare Earth Element (REE) property, located in east-central New Brunswick. These anomalies were initially identified in the southern region of the property during the 2015 program and were confirmed during August 2016 sampling. Some samples from this zone were highly anomalous for lead (up to 504 ppm Pb) while also returning anomalous values for tungsten (up to 48 ppm W). The samples also returned elevated to anomalous values for copper (up to 49 ppm Cu). Great Atlantic had previously discovered shear associated base metal mineralization, during 2012, further north of this zone in the northern region of the property. The southern region of the property was an area of focus during 2015 and 2016 exploration. Base metal and gold bearing boulders are documented in this area with samples reported to return 10800 ppm Zn (1.08% Zn) and 970 ppb Au; and 1.41 g/t Au (reported as siliceous breccia). These float samples have not been verified by a Qualified Person. The 2015 soil geochemical survey in this southern area identified lead and tungsten anomalies with elevated to anomalous copper along the northern-most sample line. Four consecutive soil samples spaced at 25 metre intervals along this line returned 426 ppm Pb and 49 ppm Cu; 148 ppm Pb; 91 ppm Pb; and 437 ppm Pb and 43 ppm Cu. Six repeat and in-fill 2016 soil samples along this line over a 88 metre interval returned 39 ppm W; 144 ppm Pb and 41 ppm W; 48 ppm W; 195 ppm Pb and 45 ppm Cu; 362 ppm Pb and 48 ppm Cu; and 504 ppm Pb. Limited sampling was completed north and south of this line. Two samples 25 and 50 metres south of the line returned 200 and 175 ppm Pb. Sericite schist float is present in the area of these anomalies.

This new zone of soil geochemical anomalies is approximately 1.8 kilometres southeast of a mineralized shear zone discovered by Great Atlantic during a 2012 trenching program.  A one metre channel sample across the sheared volcanic rocks returned 54800 ppm (5.48%) Zn and 1.08% Pb (Great Atlantic News Release of November 27, 2012).

The Porcupine Project is located approximately 50 kilometres west of the city of Miramichi and covers an area of approximately 1,275 hectares. Great Atlantic has the option to acquire 100% interest in the property from two prospectors.

The Company also announces it has granted 400,000 options to consultants of the company at an exercise price of $0.15. The options are exercisable for a two year term.

Great Atlantic Resources Corp. is a Canadian exploration company focused on the discovery and development of mineral assets in Atlantic Canada. Great Atlantic is currently building the company, with a focus on antimony, tungsten and gold.