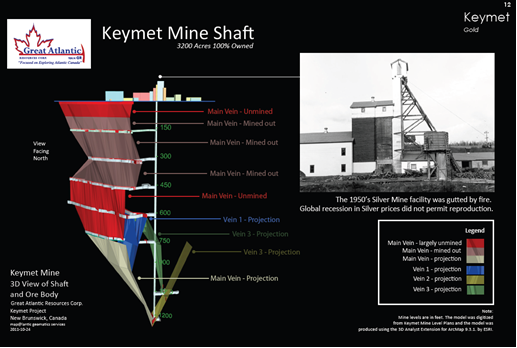 VANCOUVER, British Columbia – September 14, 2016 – GREAT ATLANTIC RESOURCES CORP. (TSXV.GR) (the “Company” or “Great Atlantic”) is pleased to announce it has received 2016 exploration permits for the Golden Promise Gold and South Quarry Tungsten Properties in Newfoundland and the Keymet Precious and Base Metal Property in northeast New Brunswick.

The exploration permit for the Keymet Precious and Base Metal Property allows for 10 diamond drill holes and 6 trenches in the northwest region of the property. This is the region of the historic Keymet base metal – silver mine, operated in the 1950s. Multiple base metal – silver bearing veins are documented in this region of the property plus gold bearing boulders. The 2015 diamond drilling program in this region intersected mineralized veins including intersections of 16.68% Zn, 1.11% Cu and 152 g/t Ag over 1.80 metre core length and 8.68% Zn over 4.28 metre core length (News Release of February 11, 2016). A gold bearing zone was intersected in one of the 2015 drill holes with a 2.10 metre drill core length sample returning 3.28 g/t Au. “ Great Atlantic has plans to being aggressively advancing all its projects starting immediately, and will be rebuilding its presence in the market place now that the market has turned”

The exploration permit for the Golden Promise Gold Property allows for 11 trenches during 2016 in the Jaclyn Zone, located in the central region of the property. The Jaclyn Zone consists of the Jaclyn Main, Jaclyn North and Jaclyn South Zones. The property, located in central Newfoundland, hosts multiple gold-bearing quartz vein zones and zones of gold-bearing float boulders, some with reported high grade gold including up to 327.97 g/t Au over 0.40 meters in drill core (Jaclyn Main Zone) and float samples of 335.9 g/t Au and 353.4 g/t Au. A National Instrument (NI) 43-101 compliant inferred resource of 921,000 tonnes at an average grade of 3.02 g/t Au (89,500 ounces contained gold) was reported in 2008 for the Jaclyn Main Zone. Gold recovery from a 2,241 tonne bulk sample collected in 2010 at the Jaclyn Main Zone was reported to average 4.47 g/t Au. Gold bearing veins are also documented at the Jaclyn North and Jaclyn South Zones (News Release of May 31, 2016). The exploration permit for the South Quarry Tungsten Property allows for 8 trenches during 2016 in the northern region of the property. The South Quarry Property is located in east-central Newfoundland. Tungsten bearing pegmatite veins occur in 2 quarries in the northern region of the property. Multiple grab samples collected by Great Atlantic in 2015 of bedrock and rubble in these quarries exceeded 1% WO3 (News Release of November 19, 2015). The exploration permit covers prospective ground north to northeast of these 2 quarries.